Princess Pricklepants was sitting around not writing blog posts.  She got the internet working on her semi-new laptop, braced herself to write something, then checked Wikipedia to look up something about procrastination, to maybe understand it better.  Four hours later she had finished many Wikipedia articles, culminating with methods of weaving with a loom.  It was really surprisingly interesting.

She had to write.  Write, write, write.  Something.  Something original.  Worth reading.  Fun.  Engaging.  Witty.  Clever.  The Great American Novel of blog posts.  Better punctuated than this.  And, ideally, with more verbs and fewer sentence fragments.  Maybe a little less self-referential.  Maybe not.

She decided to go for a little walk.  On her walk, she discovered something truly remarkable.  Behind the place where her desk was, at the very spot where she’d once peed on the floor, there was a mysterious doorway.  The sign said it led to a secret garden, though you could read that yourself.

She hurried through to the other side.  No photos were taken in order to protect the mystery.

The other side was truly mysterious.  Amid IKEA furnishings stood whimsical fantasy elements, seemingly put together haphazardly.  This was very puzzling.  Also why was the radio up where she couldn’t reach it?  Why was it playing Enya songs?  Why did the door look the same on both sides?  Why did it have a sign up saying it led to a secret place?  Wouldn’t that very sign mean it wasn’t secret?  Curiouser and curiouser.

Then she realized, this would make a great blog post! 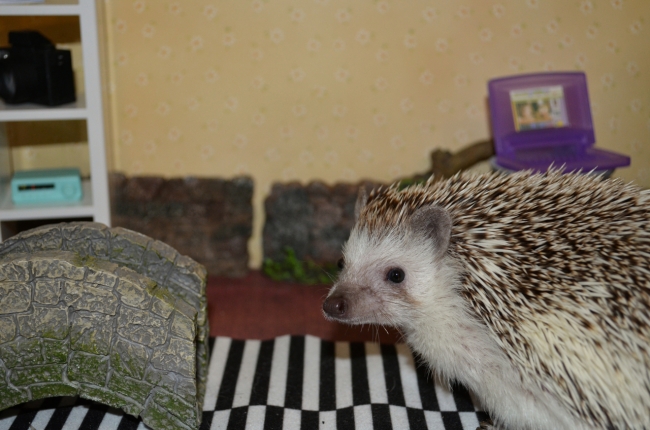 A really great one!

But first she had to find the hidden treasure.

She decided she would read a Wikipedia article on narrative structure, perhaps there was a way to give her post a clear beginning, middle, and end.

Hedgehogs and humans don’t always react the same way to things.  Reading an article on narrative structure was so incredibly exciting for a hedgehog.  When she found tvtropes, it was so exciting to a budding hedgehog blogger that she peed a little on the floor.

And then she woke up in her favorite green blanket.  It was all just a dream.

But wait, waking up in the green blanket was all a dream too.  She woke up, peeked out of her cuddle bag, and planned for her real blog post, rather than the dream one.

And, dear readers, we’re very sorry that we had that brief hiatus.  Princess would like you to know that she loves you this much: