Princess Pricklepants was very excited.  She had just gotten a brand new to her laptop off eBay that was only slightly used.  It was a perfect purple plastic powerhouse for the Princess.  She decided that with this new laptop she would sit in her apartment, write down all her really profound thoughts, and then post them on a blog.  It would be magnificent.  A hedgehog blog.  Probably nobody had ever thought of this before.

She powered up the purple thing.  It was a little slow.  After a few minutes she finally got the internet booted.

Annoyingly the internet on this computer only had one website.  No wordpress.  No google.  No AOL.  No Yahoo!  Just myspace.

And not even the new myspace, this internet had the old terrible version installed.  And not even the whole myspace.  Just one page by someone called Barbie Bakunin.  A Barbie Anarchist Blogger.

“Whoever you vote for, the government wins.  Let’s go shopping.”

This was more than a little frustrating.  She did not want to read this, she wanted to log onto wordpress to write about the things hedgehog royalty think about.  “No malls or credit cards – this implies the abdication of  reason and justice; it is the most decisive negation of  liberty, and necessarily ends in enslavement.”  It was starting to get to her.  “Freedom is disobedience.  Let’s bake cookies.”

She thought.  And brooded.  And peed just a little on the floor and wall, though it will clean up hopefully. 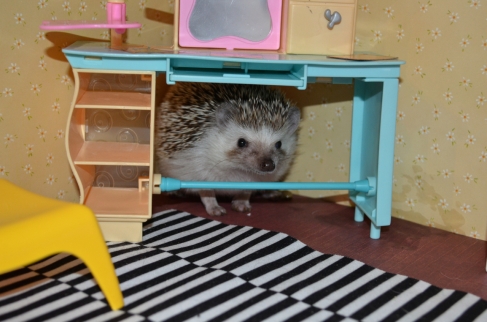 More brooding.  Staring into the void, the void stared back.  Maybe the pee wouldn’t clean up. Hello darkness my old friend.

Angrily, Princess Pricklepants began to approve of violence as a means of fighting the oppression of Barbie blogs.

She tried to smash the system.

Then, on reflection, she realized that it was probably her ISP.  She called technical support and after many hours  she had reset the BIOS, reformatted, reinstalled, upgraded her RAM, set alternate DNS servers, installed a new JVM, ejected the cup holder, tried turning it off and back on again, and did some other things.  It started working, though she had no idea why.  (But it was probably DNS since there seemed to be no way it could be.)

Soon she would blog.