A few notable things need to be cleared up before we can begin our most recent episode.

First, this is the third of a multipart series:

Part I is here

Also first, there were a few poor visitors who came here from searches that we really need to address to protect future visitors looking for these things.

Someone searched for “regal san clemente,” which kind of sounds interesting, but um, we’re not a reliable resource for regal san clemente related information of any kind, and are really confused how a search engine though we were relevant, and more confused that someone would see a hedgehog blog and decide that was a reasonable thing to click on to find out more on regal san clemente.  But still, it’s nice to have visitors.

Someone searched for “peregrinate with me” which is such a compelling little phrase that we had to share it, though we have no advice for our traveling friend.  Sadly, they didn’t leave a comment with contact for us to make our travel arrangements so they are stuck peregrinating alone.

Finally, someone searched for “sleeping in bed with pygmy hedgehog,” a topic we haven’t covered here before.  This is one we really need to address to protect any and all who might be so insane as to attempt this.  Do not attempt this.  It is a terrible, terrible, idea in every sense.  You will be intermittently woken up by your night-wandering little stabby pal.  Each time you will be awakened perforated in some new terrible way.  In the morning you will be exhausted and lying in a bed full of hedgehog poop and pee.  You don’t want that.  Your hedgehog doesn’t want that.  Nobody wants that.  Don’t do it.  We’ll definitely never try it again.

Wow, that’s a lot of preamble.  We had a Quentin-related thing, but we’ll share it some other time, were going to note our frustrating chicken problem, and wanted to mention that we’re bumping the word count, but no time for that now.  So now we will proceed to our first picture with words under it.

Princess Pricklepants and her intrepid crew carried on gallantly. Their adventures with the art-model cyclops baker left them somewhat shaken, the trip seemed more dangerous than anything they’d done before. Boris had eaten all the cyclops baker’s pies after a few hours, much to the annoyance of everyone else.  They began their daily Quillbeard Quest meeting.

“I’ve really been looking forward to today’s meeting,” said none of them.

Christine, the cow safety officer began, “Okay, item one. According to Hedgehog Adventurer Maritime Code Section II, we need to run a tidy ship.  Why is there a houseplant on deck?”

It was generally decided that someone should probably straighten things up at some point.

Boris interrupted quickly, “But it’s pie. I’m a bear. It is my nature to eat pie. Bears have no impulse control with pie.  If I didn’t eat the pie I’d be out of character.”

Boris said, “Well, fine then. There’s no way a bear would figure that kind of thing out. I will definitely never be able to reach a pie in a picnic basket, it’s not in a bear’s nature. Now that we’re done with that topic, which we definitely should not revisit, let’s quickly move on to item three. The next island on this map is Stench Island. Are we really going there? Maybe we should skip it? The map says there’s a Dread Smellbeast of Terror. I think we might want to avoid Dread Smellbeasts of Terror.”

Jane agreed, “Stench Island, Dread Smellbeast of Terror, maybe we really do want to just skip all that…”

Princess stepped in, “I hate to be the voice of reason, that’s Jane’s job. Still, the map says there’s something important in a chest there that we need to get. So we need to go there.”

Boris wasn’t happy with this, “But… It’s named Stench Island. I think that our heroic quest would be nobler if we were to bravely avoid danger. Also, someone should iron the sky, it’s very strange to see wrinkled clouds.”

Princess insisted, “Don’t try to distract us with meta-commentary. We have to go.”

“Fine, but I’m staying on the ship.  Great meeting, guys.”

Boris said, “All those in favor of Princess going to the island, since she has natural defenses?  Surely the Dread Smellbeast of Terror would fear her.”

There was only one vote against.

“But quills have nothing to do with guarding against smells, and I have an incredibly sensitive nose. I would go into details of hedgehog biology explaining how we use our sense of smell to forage, but that’d be tedious. Plus if the Dread Smellbeast of Terror attacks, being a ball of spines doesn’t exactly solve that problem.”

“But cows, sheep, and bears are defenseless. Plus we already voted. Protect our democracy, go forth to Stench Island.  It would be ill-mannered to ignore our vote.”

Princess sniffed around.  It wasn’t too bad, a little musky, but not incredibly bad. Plus there was a chest like the one pictured on the map just sitting there. She went to investigate. Suddenly the Dread Smellbeast of Terror appeared! 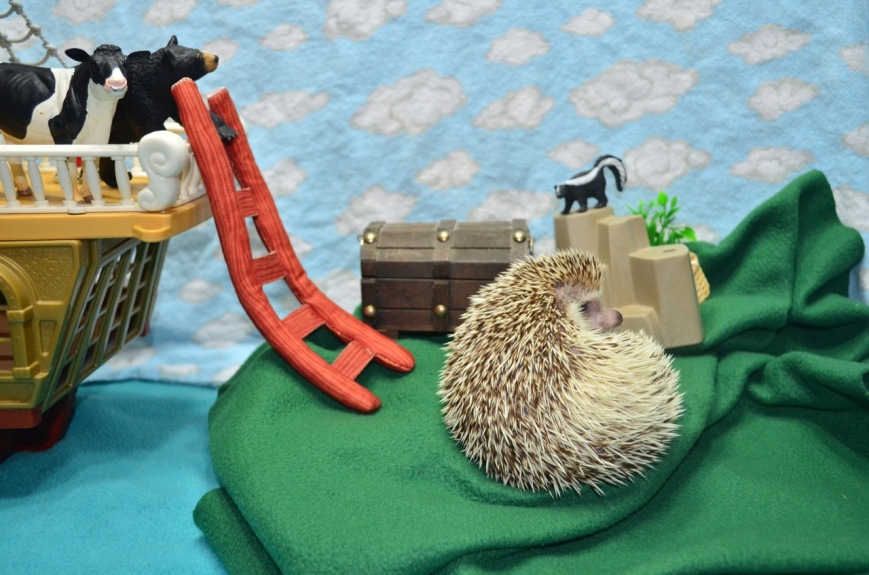 “Oh, that’s a really nice title.  I really wish I had a really nice long title like yours, but I haven’t got that.  I just have an utterly terrifying natural defense. I insist you leave my island, or you will smell my wrath!”

Princess decided to use the power of politeness to defuse the situation.

“This is a really lovely island. I notice that we both have natural defenses, we’re similar in that we’re not really aggressive towards other animals, just inclined to defend against predators.”

“Yes, it’s true. Honestly, I really don’t like doing this job. I really just want to hide when anyone comes. But I was elected by my tribe to carry on the ancient Quillbeard Calling, so they left me here with this task (I think I was elected since I took one of Flower’s cookies and accidentally spilled tea on his thesaurus – Flower was really angry). So I’ve been doing this. It’s not really my style at all. I’d much prefer to pursue my true calling, writing my travel blog, Peregrinate With Me.”

There was more pleasant conversation, and eventually Princess Pricklepants and Franklin (Dread Smellbeast of Terror was more of a nickname) were fast friends through the power of politeness, manners, etiquette, and delightfulness. Franklin learned about Captain Quillbeard’s capture and failed swimming experiment, determined that there was no longer a need for the Quillbeard Calling, and agreed to let them open the chest provided he could join them on their adventure.

They opened the chest and were somewhat disappointed. There was nothing really interesting, just some bottles of wine. Only the cows were really wine drinkers, and none of them had a corkscrew. But apparently it was important, so they loaded it on board.

Christine, the cow safety officer had a concern, “Princess, we have a slight issue. I’m not sure if you’re aware, but Harold is a skunk. We can’t take a skunk on the boat. Hedgehog Adventurer Maritime Code Section IV Item 3 says no skunks are allowed on the decks of pirate ships engaged in treasure seeking.”

Princess had a solution.

With a suitable place for Harold on the ship, they peregrinated with one another onward towards their next adventure.

Will they finally find Captain Quillbeard’s mysterious treasure? Will they visit another island while we continue to wait for our package of props to be delivered? Will we sort out a better way to make something island-like? Will we ever iron the sky? These and other questions may be answered in our next episode, Princess Pricklepants and the Perils of Pirate Plunder: Part IV – The Journey Continues (or something similar).  Well as it turns out, it’s really named Pricess Pricklepants and the Perils of Pirate Plunder: The Picky Princess.  You may read it now.