While there hasn’t been nearly a long enough delay, here we are with another post.  Like many others, it’s going in a slightly different direction.  If there are three phrases that describe us, they are “somewhat inconsistent,” and “not great at counting.”

A reader, Quentin, wrote in to mention that they did not believe the art works we had been posting recently were real art.  We can only say that art is the thing artists make, and we aren’t in any position to judge besides that since we’re not artists.

No readers wrote in to ask about their homework though many visited searching for answers to Princess Penelope’s Figurative Language homework, which we hope we were able to help with in our small way.

One person also arrived here searching for “can a hedgehog die by being too loud,” to which the answer is that hedgehogs do not like loud noises at all, it would cause them chronic stress, and they definitely shouldn’t be kept in loud environments.  Even if they don’t die, it’s cruel to expose them to loud noises. Don’t do that.

We’ve promised to move on from Hedgehog Art Through History series, as it was time for a proper story, so that’s what we’ll do.  Pretty soon.  Since we aren’t going to do a post on art, we wanted to share this remarkable illustration of a squirrel drinking coffee from a crazy straw from a rejected Alice in Wonderland story to make sure we’re not foolishly consistent.  This also give us the opportunity to subtly plug the new shirt with this design. Sorry. 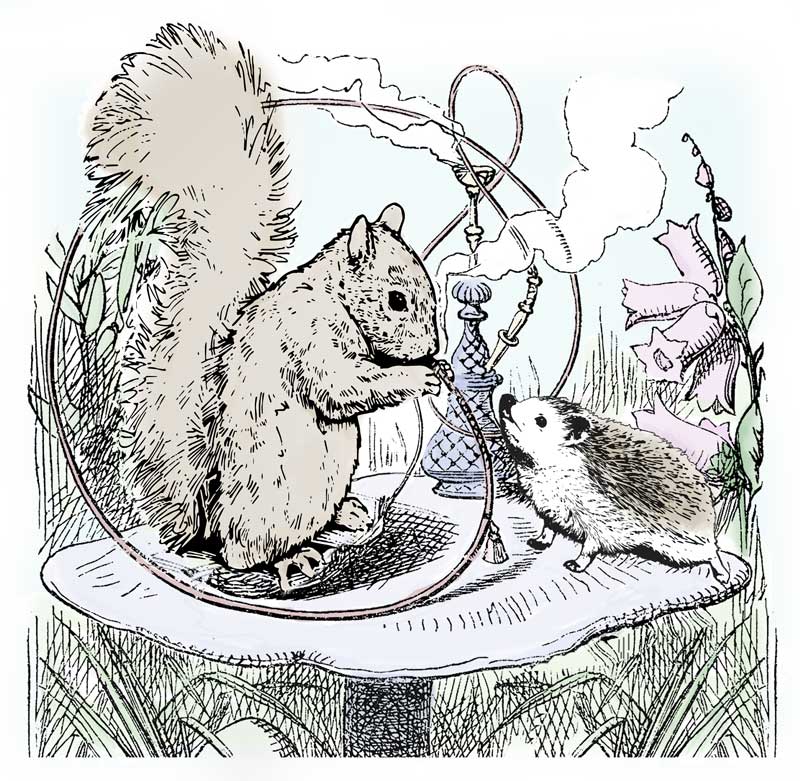 And so, as we always try to do, we begin our story with a picture with words under it. 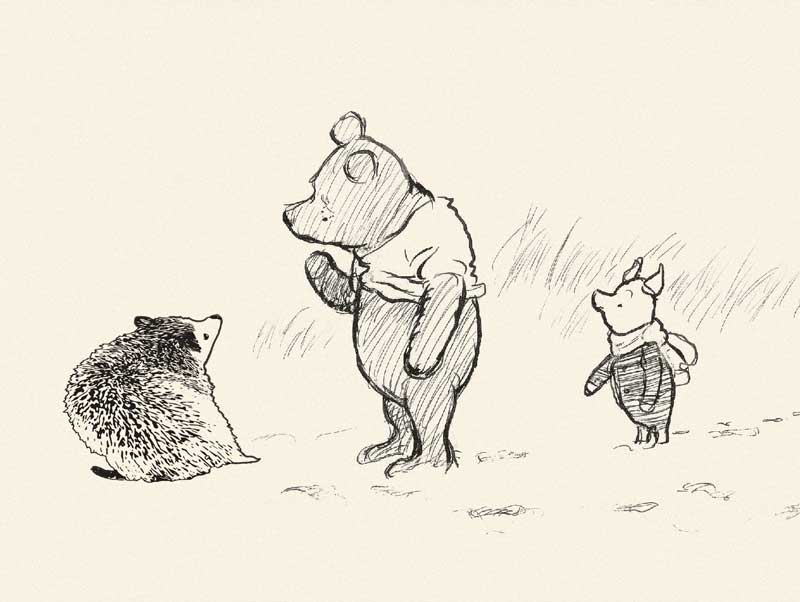 Once upon a time, a very long time ago now, around last Friday, Princess Pricklepants was taking a lovely stroll in the garden.  Through a bit of digging, a few extra left turns, and perhaps not quite the right number of right turns, she wound up in a very unfamiliar place.  The colors were so very wrong that they weren’t even there, and everything smelled strangely, almost like paper.  She decided to pause, close her eyes and take in a nice deep sniff to see if she could smell the right direction to go.  In mid-sniff she heard a small squeaky voice.

Her Highness was not a Pricklebump, but for the time being chose to let it pass as there were greater concerns, “Oh, hello, I’m afraid I’ve become so very lost I can’t even find my name to properly introduce myself.  So very sorry.”

“Well, hello whoever you are, I’m Piglet,” said Piglet.

“I’d really be grateful, though there’s something else I’m missing I’m more worried about, but I’m not exactly sure what it is.”

Piglet was very worried, “Oh no!” 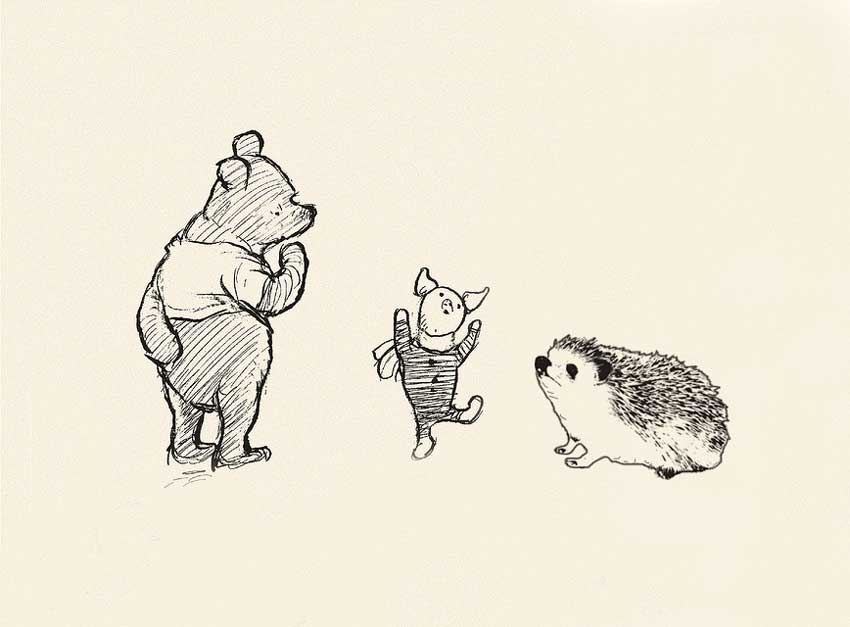 “Don’t worry,” said Pooh, “We can take you to Owl.  If anyone knows anything about something, it’s Owl who knows something or other.  Or maybe the other way.”

He Highness decided the polite thing to do would be to just let the piglet with an anxiety disorder use an incorrect name since she didn’t have a proper name to offer.  These monochrome animals certainly did have a lot of odd pronunciations, and very strange habits with capitalization as well.

Her Highness wasn’t fully sure about the plan. “So, this Owl, does it eat rodents?  What about hedgehogs?”

Her Highness was relieved, so they set on their way.  As they walked Pooh hummed a tuneless little melody which turned into a song about bees and honey and things.

Her Highness decided to make an attempt at conversation.  “You know, you’re a very unusual bear.” Her Highness was used to bears with Canadian accents who didn’t hum and sing about bees.

“Well, you’re rather unlike any, um, Prickly Animals I’ve met either.  Delighted to meet you.”

“Delighted to meet you too.”

They arrived at Owl’s home in a lovely old tree which was drawn really nicely.

Pooh said, “Now all you have to do is walk to the door and ring the bell, since a knock means you’re there to eat honey.  Or maybe it’s the other way.  I never remember.  Still, maybe you should knock, I could use a little Smackerel of something.”

Her Highness wasn’t fully comfortable with this arrangement, but happily it didn’t matter, as Owl was already outside, hopefully not in the mood for eating any hedgehogs.

“Why it’s a Periwinkle,” exclaimed Owl, with his huge deadly talons gripping the branch.

Her Highness was working diligently not to lose patience with these creatures and their habit of calling everything the wrong name with strange capitalization, but knew better than to offer a correction to a rodent and hedgehog eating predator, as this wouldn’t be polite.

“Why hello Owl, it’s very lovely to meet you. I’m afraid I’ve become very lost, so lost I can’t find my name.  I met a bear named Ooh who suggested you might be able to help.”

“Well, when you lose something, the customary procedure is to go back to the first place you saw it, then go to every other place you’ve ever seen it and eventually it’ll be in one of those places.”

This was helpful advice in a sense of trying to help, but also unhelpful in the sense of not being practical for someone who’s lost, or even for someone who wasn’t lost.

“Well thank you, I’ll toddle off and see about going to many places.  Oh, also, the bear wanted honey.”

“Oh, I’m afraid I’m all out due to a recent bear visit.  You’ll need to try a bee hive to find honey, maybe you could use a balloon to get some?”

“I’ve always had very bad experiences with balloons I’m afraid, but thank you. Very lovely visiting you, good bye.”  She hurriedly made her way from the large-taloned raptor.

As she scurried politely, she remember back to her last balloon adventure.  It had all started off so nicely, with a lovely balloon and no bees at all.

Then several seconds later there was a terrible sound, just the kind of loud sound she liked least in the world, really, and after the sound her former balloon wasn’t very lovely any more. No, there would be no balloons.

When she got back to Pooh and Piglet she carefully forgot to mention the balloon, bee, honey idea, but related the rest of the advice which they chose to ignore.  Not being sure what to do, they decided to walk about to see if the right idea might visit, though all the ideas that came to visit were never quite right.

As they walked, they eventually came upon a morose donkey despondently looking at its feet. 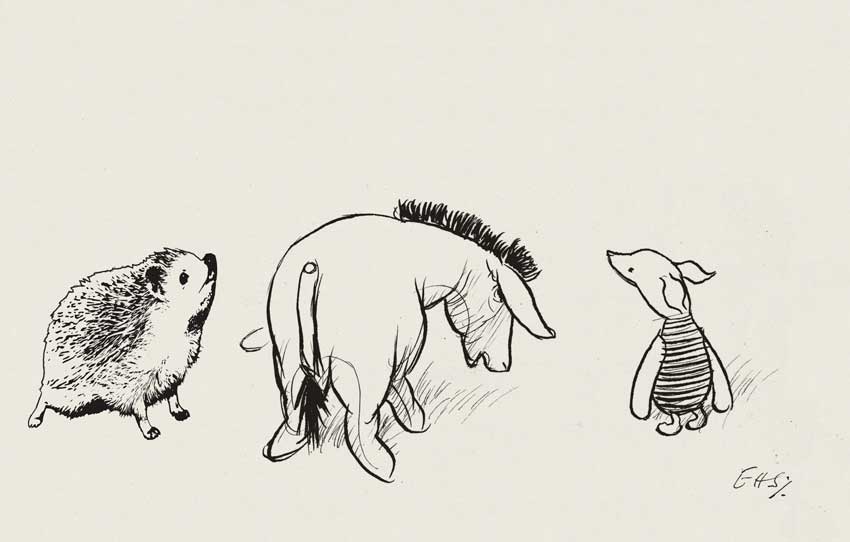 “Oh, Good afternoon, Pooh, Piglet, hedgehog,” said Eeyore gloomily. “If it is a good afternoon,” he said. “Which I doubt,” said he. “It’s probably going to rain.”

“We seem to have a very confuddling problem, you see, this Pricklebump has lost a Thing, but she’s not sure what it is.”

“Oh, well.  Probably will never find it.  All the same, it’s better to lose Something and not know what it is, than to know what it is.  Then you can forget it, and go somewhere else to be Alone and Forgotten sitting in the Rain. Like me.”

“You’re not alone, dear Eeyore, since we’re actually here, silly.  Also it’s not raining.” said Her Highness, who was still quietly losing her mind at their capitalization habits.

“Oh, well it might not be Raining now, but one day it will. This Thing you’re looking for, what does it look like?”

“Oh, if I could draw it, I’d remember it for sure.  I went with Ooh Bear to see Owl, but they didn’t exactly help, and I’m quite erplexed, and at a loss for what to do.”

“Does it perhaps look like the letter you keep forgetting to use?”  Eeyore made a P on the ground with some sticks.

With the letter P found, Princess Pricklepants was at last able to mention her name, which was a relief, as the pressure of being powerless to proffer polite greetings was perturbing. Pooh led the way to Christopher Robin who it turned out followed her on Twitter (Facebook being for old people), and so was able to help her find her way home, and all was well in the world again, wrapped up remarkably quickly since there was a 1,000 word limit which we actually passed a surprisingly long time ago.

So we must say, “The End” for a post that was mostly an excuse to show off some line drawings we’ve been working on as a trick to continue with Hedgehog Art Through History even when we weren’t supposed to.

Stay tuned for our next episode: Princess Pricklepants and the Mystery of Monkey Voters (working title)