In the news, we’ve got two items for you.

First, you won’t ever have to worry about fame going to our head.  We made the mistake of looking at Alexa, a site that shows the relative popularity of web sites.  Our humble blog is now even humbler after seeing that we’re the 5,568,903th most popular blog on the Interwebs. But that means you, special reader, can show how much cooler you are to your friends by referencing this very blog which they definitely will never have heard of.

Second, we didn’t have another item, but felt badly about only having one.

Third, with the holidays looming, we might be a bit spotty on posts.

Fourth, we really had a second item, but got to it third.  Sorry for the confusion.

Fifth, Her Highness has been in a bit of a poetic phase recently.  Behold: 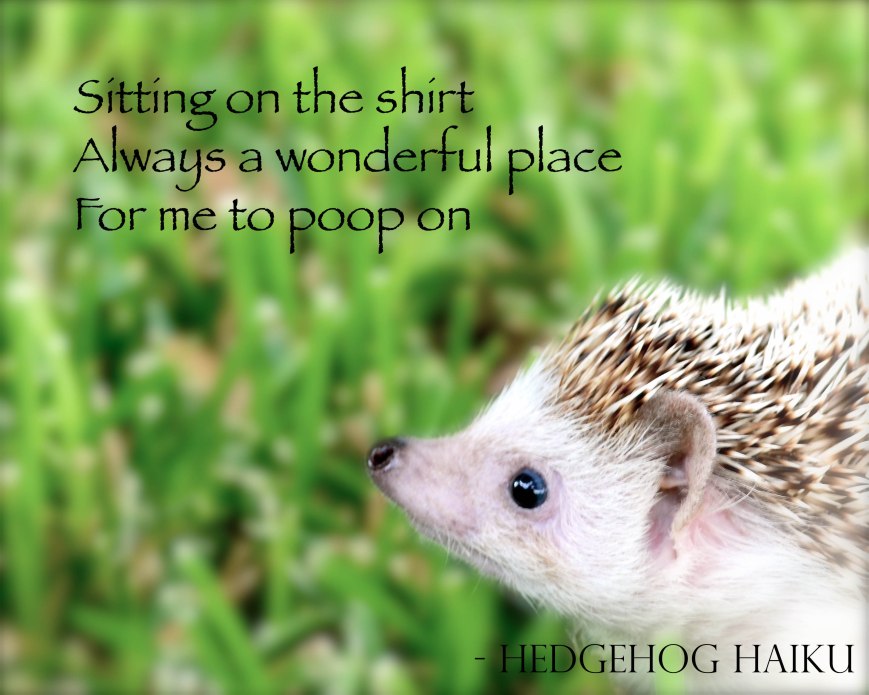 And now, we begin our tale with our first photo with words under it (except the photos above, which clearly don’t count.)

Her Highness endured the trip back from the island with some discomfort, but they made it back home. There were some problems finding a new home for the chickens and monkey.  Her farmer friends on hedgehogfarmercentral.com already had too many chickens and monkeys, so they had to stay at her place until arrangements could be made.

As a result of the new guests, Her Highness was having a very trying morning. So trying indeed, that these were the times that try a hedgehog’s soul. Things had been oddly unpleasant since the return from their great adventure. Chicken noise, chicken mess, and other chicken problems were piling up around her home.

But the chickens were the lesser concern. The greater was the monkey business. At first the monkey had seemed nice enough, but for some reason the monkey refused to speak. It just said “ooh ooh, aah aah” and then jumped around. Sometimes it threw things that definitely never, ever should be thrown, like pillows. It was a troublingly monkey.

While Jane wasn’t pleased by the chicken who’d decided to use her head as a nest, the monkey put googly eyes on Her Highness’s hindquarters. So distressing! So very discourteous! So incredibly impolite!

Her Highness wasn’t sure how this had happened.  One moment the monkey was gesticulating, oohing, and aahing along, pointing at the gargantuan Starbucks cup prop that Boris had bought on a whim from eBay.  The next thing she knew, she was in a very undignified and distressing position.

Regardless, it was definitely the last straw. Princess Pricklepants decided it was time to take the monkey on as a project. The monkey must become a genteel monkey, educated in the ways of politeness, manners, geography, figurative language, and related things that would prevent another Starbucks Incident.  It would be rather like My Fair Lady, except My Fair Monkey. Soon the monkey would be singing lovely songs about dancing all night, and all would be nice and proper.

She worked out a lesson plan on hedgehoglessonplancentral.com, set up a classroom in the kitchen, and began her lesson in politeness. “Now, monkey, after you’ve eaten your banana, where does the peel go?” “Oooh ooh, ah ah.” The lesson quickly became very trying due to the language barrier.

She called Boris the bear into the kitchen.

“Boris, this monkey isn’t speaking words I understand.  I think this may be a Canadian monkey. Perhaps you can translate?”

The monkey picked up a sandwich and said “Ooh ooh, ah ah.”

“The monkey always says that.  Maybe the monkey’s always talking about sandwiches?”

The monkey threw the sandwich.

She addressed the monkey, “No, monkey, throwing things is definitely not polite. Now, what is the capital of Argentina?”

“No, it’s Buenos Aires. I showed you on the map. I think that the monkey’s not saying ‘sandwich,’ it’s just speaking some strange language. I think there’s a figurative language barrier. Perhaps it’s speaking Cockney?”

The monkey left. It didn’t say goodbye or engage in any polite formalities. This was not like My Fair Monkey at all.

She sighed. This was a problem. It’s difficult to educate a monkey in manners when you can’t speak with it. She asked herself, “What is the ideal way to solve any problem?”

She called a meeting.

Jane: Item one, naming the monkey. What should we call it?

Jane: Yes, but what should we name it?

(After a much longer conversation than is polite to relate, it was decided to name the monkey “Monkey.”)

Boris (bear): It’s the monkey. The monkey is a banana thief! A cruel taker of snacks.

Jane: Did the monkey take the three pies that were out this morning? Remember a few minutes ago when we had two dozen donuts? I count eight now.

Boris: This meeting is about the monkey.

Princess: The monkey is also very impolite. We should discuss monkey manners.

Boris: As a bear’s-rights snacktivist, I find eating my food much more serious.

Jane: Well, all the items are about monkey business. I suppose we can we just talk about the monkey business, even if it does ruin the meeting format.

Princess: So what is the appropriate thing to do in these circumstances?

Boris: I move that we send Monkey back to the island. Jane, you can take the monkey in the boat. We’ll wait here.

Jane: Boris, you are insufferable.

Boris. Label me all you like. I don’t believe in labels. I’ve recently stopped believing in pronouns or adjectives as well. Prepositions are also out.

Jane: Moving on… I just looked up ‘monkey business’ on the internet. Do you know how many jobs can be replaced with trained monkeys? I had no idea. We should get this monkey a job.

Princess: Monkey, what kind of job would you like to do?

Boris: It seems to be saying it wants to make sandwiches. Does some kind of sandwich-making job exist?

Princess: Is there a job where they pay you to throw things and be impolite? Monkey is very good at that.

With much more discussion that went on longer than is decorous or seemly to relate, and in a manner that was as rambling, overlapping, and digressive as only meetings can be, they determined that they should find the monkey some kind of job, the exact details of which were only loosely agreed upon (no throwing, no making sandwiches, no computer programming, and acupuncture was right out. Songwriting seemed like a promising idea, though.)

With that decision complete (and us passing 1000 words), it felt like a full day. Princess Pricklepants retired to her happy place to read a book.

Will the monkey find gainful employment? Will chicken troubles appear? Will peculiar and not very relevant photos be forced in? Will chicken crossing road jokes appear? Is a chicken crossing the road poultry in motion? Will they think to ask the strangely-ignored chickens to translate the monkey’s mysterious language? Will they do anything with the Gem of Destiny? Will a tea party involving monkey manners lessons happen? All these and other questions may be answered when the next blog post appears.

10 thoughts on “Princess Pricklepants and the Monkey Business”